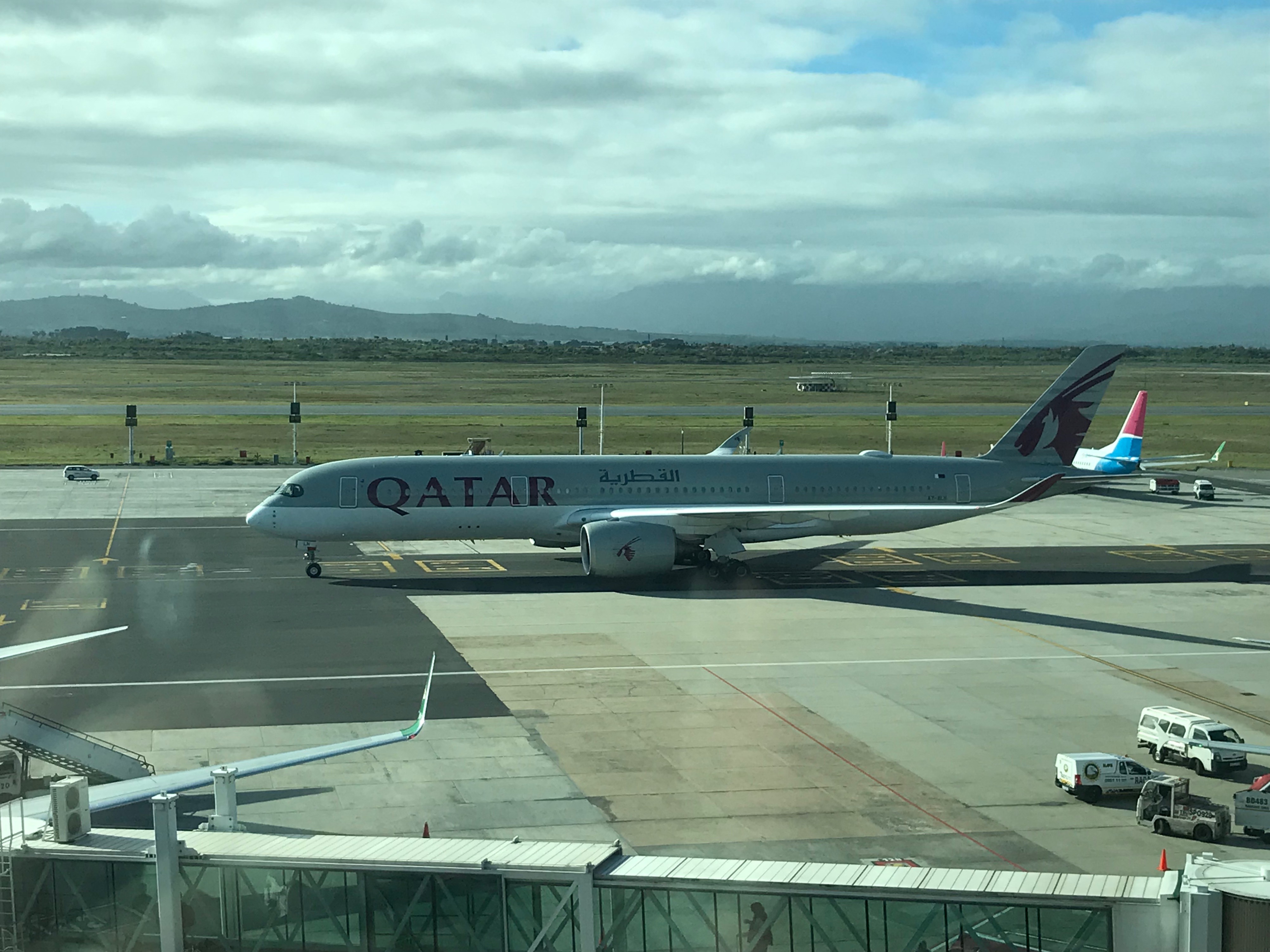 A Qatar Airways 787-8 at Windhoek Airport

4 Things To Know About Qatar Airways

Unfortunately, there is no section of extra legroom economy class. Last year, Qatar Airways unveiled a new economy class product, which will be featured first onboard their A321neos and was hyped as “revolutionary,” in addition to being advertised profusely on their website, and while it does seem to be quite good (with features such as a 13.3 inch 4k screen, USB C ports, and a slightly larger table), it certainly isn’t anywhere near “revolutionary,” like their QSuite product was. In terms of baggage, passengers are allocated 30kg (66lbs) of baggage in total, besides flights to the US, Canada, Argentina, and Brazil, where passengers are allocated 2 23kg (30lbs) bags.

Qatar Airways’ business class is known to be among, if not the best in the world (especially with their QSuites), having been ranked as having the world’s best business class by Skytrax in 2019 (and no, I don’t think this is one of their corrupt rankings, such as when they gave Lufthansa a 5-star rating, while Emirates only has 4 stars). Qatar also has a world-class business class soft product, with great bedding that includes mattress pads on long-haul flights, in addition to being an airline that is known to have amazing service and among the best food in the world in business class. Passengers also have access to Qatar Airways’ fantastic Al Mourjan lounge in Doha, along with other Qatar Airways, Oneworld, and partnering lounges around the world. In addition, passengers have access to Qatar’s onboard lounge on their A380, along with first class passengers. In terms of baggage, passengers are allocated 40kg (88lbs) of checked baggage on most flights, though on flights to the US, Canada, Argentina, and Brazil, passengers are allocated 2 32kg (70lbs) bags.

Recliner: Business Class on not retrofitted A320/A321s features recliner seats with leg-rests. These seats also have personal video screens. These aircraft are mostly used on short-medium haul routes (1-6 hours). Business Class on these aircraft is in a 2-2 configuration. These seats are fairly similar to short-haul business class in the US, although the seats have more legroom and have legrests.

Angle Flat: Some of the not retrofitted A330s still feature angle flat seats with around 165 degrees of recline. While these are fine for short haul flights, if you are aware that one route that you are traveling on has these seats, try to avoid it, as angle flat seats do not get the most out of your money on long haul flights which the A330 is flown on. Business Class here is in a 2-2-2 configuration. Qatar Airways seems to have retired or sold (to Air Italy and Aer Lingus) most of their older A330s with angle flat seats. However, since even their newer A330s don’t feature an amazing business class seat, if possible, try to fly on some of Qatar’s other aircraft (such as the A350) since they offer much better business class seats.

Forward Facing Flatbed (777): On the not retrofitted 777s, business class features flatbed seats in a 2-2-2 configuration. The seats are not private, feel outdated, and don’t offer direct aisle access to every seat. These aircraft are also flown on some ultra-long-haul routes, and for business class on those long flights, not having all aisle access is not ideal. Fortunately, Qatar Airways is in the process of retrofitting their 777s with the best business class seat in the world – the Qsuite.

Reverse Herringbone: Business Class on Qatar’s A380s, Boeing 787s, along with on older A350-900s features flatbed reverse herringbone seats with all aisle access, with the seat model being the Rockwell Collins Super Diamond. This model is generally considered to be one of the best business class products on the market as it offers direct aisle access to all passengers and has a large amount of privacy.

Qsuite: Qatar Airways’ Qsuite is generally considered to be the best business class product on the market. It is only one of two business classes in the market to have fully enclosed suites (the other being on Delta Airlines). Seats are staggered and alternate between being forward facing and rear facing. Seats in the middle of the cabin have a divider in between the forward and rear facing seats, which can be lowered to create a four-person suite, advertised as being ideal for families and work associates. To be clear, this is the only product in the entire world (first and business class) to be able to have a four-person suite. The seats closer together in the middle of the cabin can create a double bed, making it only one of two business class seats in the world to be able to have a double bed (the other airline being Singapore Airlines). The Qsuite is featured on all Airbus A350-1000s, newly delivered Airbus A350-900s, retrofitted Boeing 777-300ERs and retrofitted Boeing 777-200LRs. Overall, due to the amount of privacy and practicability for passengers, the Qsuite business class is widely accepted as the world’s best business class.

Unlike its business class, Qatar Airways does not have an industry leading first class product. On their Airbus A380, Qatar Airways features open suites; while excellent, they still are sub-par to other airlines such as Emirates, Etihad, or Singapore Airlines which have closed suites, some of which even have a separate chair and bed. The seat is fairly private and I imagine that it would be extremely comfortable. There even is a “Buddy Seat” which has the cool feature of being able to be face a companion, though it is still in no way industry leading. It’s a bit ironic that Qatar’s Qsuite business class has a closing door while their flagship first class product not have closing doors, making their Qsuite seat debatably (though probably still not) better than its first class seat. First class also has a much superior soft product in comparison to business class, including superior bedding, food, along with much more personalized service. Passengers also get access to Qatar Airways’ excellent Al Safwa lounge in Doha, along with their onboard bar on their A380.

One other oddity about Qatar Airways is that on their intra Middle Eastern flights, they market business class as first class. This is so that passengers traveling within the Middle East can have access to the first class lounge and can have (slightly) superior onboard service. In addition, passengers traveling on long-haul flights connecting to an intra Middle Eastern flight do get booked in first class on the short segment, so that means that they in addition have access to the Al Safwa lounge while transiting in Doha. Please note that in terms of the short-haul “first class” seats, they just use aircraft which usually have business class (such as the A320 or A350) and brand the premium cabin as first class (refer to seat list in the business class section).

Lastly, in terms of baggage, passengers have the same baggage allowance as business class: they are allowed to check 2 32 kg (70lbs) bags onboard each flight.

Have you ever flown on Qatar Airways? Share about your experience below in the comments section!